The Sleepers were five robots created by Red Skull near the end of World War Two and hidden in several locations where they would generate and store energy to be activated in a future date as retaliation in case of the Third Reich being defeated.

One of the best known Sleepers is the fourth one, able to control its desnity and shoot volcanic thermal energy through its faceplate. Red Skull activated the Fourth Sleeper against Captain America, but Sharon Carter used the Sleeper's crystaline control key to make intangible and unable to change back.

The Fifth Sleeper was released in Las Vegas when the Red Skull got in conflict with the Kingpin for leadership of a local branch of HYDRA.

Time later, the Fourth Sleeper was restored to tangibility by Machinesmith as a "Trojan horse". When Cap and Fabian Stankowitz found the inactive Sleeper, they brought it to Avengers Mansion to be put in stasis among other captured robots, not knowing that Machinesmith's mind was inhabiting the Sleeper then. Before being put in stasis, the Sleeper awakened and attacked. Despite its strenght, the Sleeper had lost its density and volcanic powers, and Captain America defeated it.

Machinesmith also used the Fourth Sleeper as a body when working for the Red Skull. When Cap and Falcon went to rescue Diamondback from Crossbones and Jack O'Lantern, Mother Night sent the Fourth Sleeper agains Cap's plane, piloted by Zachary Moonhunter. Moonhunter used his piloting abilities to send the Sleeper to the blades of the villains' helicopter. 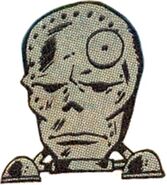 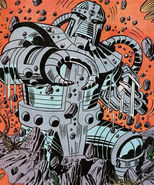