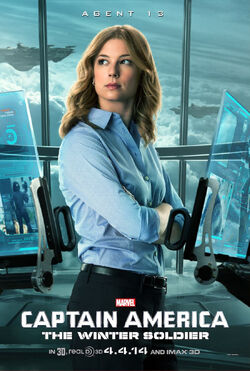 Sharon Carter is an agent of S.H.I.E.L.D. who befriends Captain America. They eventually begin a romantic relationship, and Cap finds out Sharon is the younger sister of Peggy Carter.

While working as a S.H.I.E.L.D. liaison with the NYPD, Sharon investigated and infiltrated the National Force. During one of the National Force's battles with street criminals in Harlem, the National Guard was sent in to put an end to it. Under the effects of a mind-altering gas, however, Sharon apparently activated a self-destruct device in her National Force uniform and apparently committed suicide. Rogers was shown the event on videotape.[1]

Actually, Sharon was sent undercover by Nick Fury for another mission and her death was faked so Captain America wouldn't follow her and blow her cover. However, Sharon lost communication with SHIELD and had to become a fortune soldier to survive. She was eventually found by Red Skull who neeed her help against a common enemy: the Kubekut, who stole the cube to free Hate-Monger, while his trapped mind began re-shaping reality into a world where the Nazis won WW2. Captain America finds about Sharon's survival when she and the Skull get him to help against the Kubekut.