Sensational Hydra as Cap organized a press conference to tell one of each twenty people was a Skrull in disguise, and betrayed his two lackeys to support the charade. This creates a mass panic as everybody tries to kill anybody suspected of being a Skrull spy. 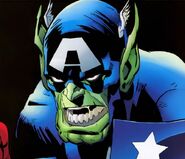