Captain America's shield proved most effective in his confrontation with Thor as it absorbed the full impact from Mjolnir, Thor 's enchantmented hammer, and causes a massive shock-wave to the surrounding forrest area. Captain America uses the shield again in the battle with the Chitauri in New york to shield his teammates as well himself. Iron Man uses his Repulsors rays on Cap's shield to launch an effective counter strike attack on Chitauri unit. Cap then uses the shield to protect himself from a grenade blast that sends him hurtling out a window and to the street below unto the car roof. Because of the Shield structure Cap was able to curl himself and protect himself from receiving extensive injuries.

Captain America's Shield is a very unique and powerful shield that can withstand any blow or blast and can be thrown very hard at the target then bouncing to other foes before going back to Captain America, the main user.

The Vibranium from which the shield was made was sent as a gift to President Roosevelt from T'Chaka. Howard Stark used the vibranium to create a unique battle shield for Captain America to use it as his main battle weapon to fight against HYDRA during World War II. Before this he used a different shield based on the same design but this shield was different from the next version. The vibranium was obtained when Panther's father gave it to Howard as a gift.

When Captain America fell in ice after the explosion, he and his shield were frozen for decades until the 21st century when the Avengers found him in the Artic Circle while looking for the Hulk. As Cap woke up, he mistook the Avengers as HYDRA agents and engaged them in combat until Wasp shows him the memorial statue of him and Bucky near the Statue of Liberty. After realizing that he's in the modern century, he fell into lethargy and put down his shield then left.

His lethargy had left him as Baron Zemo, Captain America's archenemy, infiltrated the Avengers Mansion to kill him. As Zemo is about to kill him, Cap's shield was thrown by Black Panther to save him before disappearing. Regaining his shield back, he immediately fought and beaten Zemo who in turn threw a time bomb near an unconscoius Wasp and then left. But Cap saved her by placing his shield near the bomb before it exploded.

Captain America had continued using his shield before Loki destroyed his vibranium shield with the OdinForce thus forcing him to use Lady Sif's shield to battle him and assist the Avengers.

The remains of his shield were kept by Cap inside his room. It was later repaired by using a Vibranium machine that fused the pieces back together.

Captain America's shield resembles the American flag. It has white lines and a star in the middle. It is primarily red and shares all traits of the flag. Types of Shields and Abilites 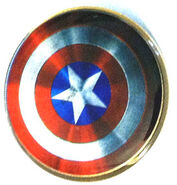